Neighborhoods in the Program

Currently the Traffic Calming Program contains ten holdover neighborhoods and those new neighborhoods, which have petitioned for program admission and successfully passed a traffic study of vehicles on neighborhood streets, speed studies and accident records for the neighborhood. All economic levels of the City are represented. Concerned parents are the driving force behind the majority of neighborhood mini-committees currently preparing traffic calming plans for their neighborhoods. 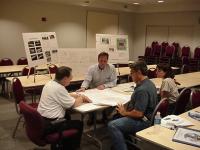