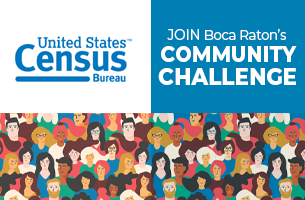 Make it count for Boca Raton!

UPDATE 10/15/2020
The deadline to submit responses to the Census has been changed to October 15, 2020. View press release from the US Census Bureau.

UPDATE 10/6/2020
The deadline to submit responses to the Census has been extended to October 31, 2020.  View press release from the US Census Bureau.

We’re counting on all our residents to respond to the census online, by phone, or by mail right away.

Did you know that by responding NOW....YOU help determine congressional representation AND Boca Raton's share of federal funding for the NEXT 10 YEARS?

Each response helps make Boca Raton a better, safer home for your family and neighbors with funding for critical services and infrastructure like our schools, hospitals, firefighters, roads, beaches, veterans, families and more.

View the interactive Self-Response Rate map below to see how your neighborhood is responding, view the weekly self-response rates for individual census tracts and neighborhoods.

A few minutes can impact the next decade. If you haven't already, respond at my2020census.gov and make it count!

Census 2020: It Matters to Boca Raton

One of their statistical programs is the Decennial Census, generally known as the U.S. Census. It’s the once-a-decade population and housing count of all 50 states, the District of Columbia, Puerto Rico and the Island Areas. It counts each resident of the country and where they live. It is also mandated by the Constitution.

Why is this important for our city?

What matters the most to you? Schools? Transportation? Hospitals? Infrastructure?

When you respond to the 2020 Census, you help your community get its fair share of nearly $700 billion annually in federal funds. This money is spent on public resources that are important to you such as schools, hospitals, roads, public works and other vital programs. The amount of federal funds, grants and support to Boca Raton are based on population totals and breakdowns by sex, age, race and other factors.

Additionally, the Census count determines how many representatives each state gets in Congress and is used to redraw district boundaries. It also helps academic institutions, medical facilities and businesses of all sizes to help make future decisions, such as where to open new places to shop.

Every home should have received an invitation to participate in the 2020 Census prior to April 1, 2020. One person should respond to the Census for each person either online, by phone or by mail. That person must be at least 15 years old, should live in the home or place of residence themselves and know general information about each person living there.

If you misplaced your invitation that contains your Census ID number, visit my2020census.gov, click on "Start Questionnaire" and select "If you do not have a Census ID, click here." Learn more about responding to the Census.

What’s happening in our community?

Starting in 2019, you may have noticed census takers in your neighborhood. However, in light of the COVID-19 outbreak, the U.S. Census Bureau has adjusted 2020 Census operations in order to protect the health and safety of the public and Census Bureau employees. Census workers are implementing safety guidelines from Federal, State, and local authorities regarding COVID-19 and currently operating in their offices only. When field operations resume, it will be based on county and local restrictions as they exist. For more information regarding COVID-19 and the 2020 Census, visit their website.

Protecting Yourself and Your Identity

By law, the information gathered by the Census cannot be shared with law enforcement, including Immigration and Customs Enforcement, the Federal Bureau of Investigation, or the Internal Revenue Service. Title 13 is clear that the data collected can only be used for statistical purposes and your privacy is protected.

Census workers are subject to $250,000 fine and/or five-year sentence for disclosing any information that could identify an individual or household

Phishing is a criminal act in which someone tries to get your information by pretending to be an entity that you trust. Phishing emails often direct you to a website that looks real but is fake—and may be infected with malware.

Further, during the 2020 Census, the Census Bureau will never ask for:

In addition, the Census Bureau will not contact you on behalf of a political party.

If you’re not sure if the communication you received is legitimate, Contact Us.

If someone visits your home to collect a response for the 2020 Census, you can do the following to verify their identity:

Visit 2020census.gov and their Ways to Respond webpage for any questions you may have.